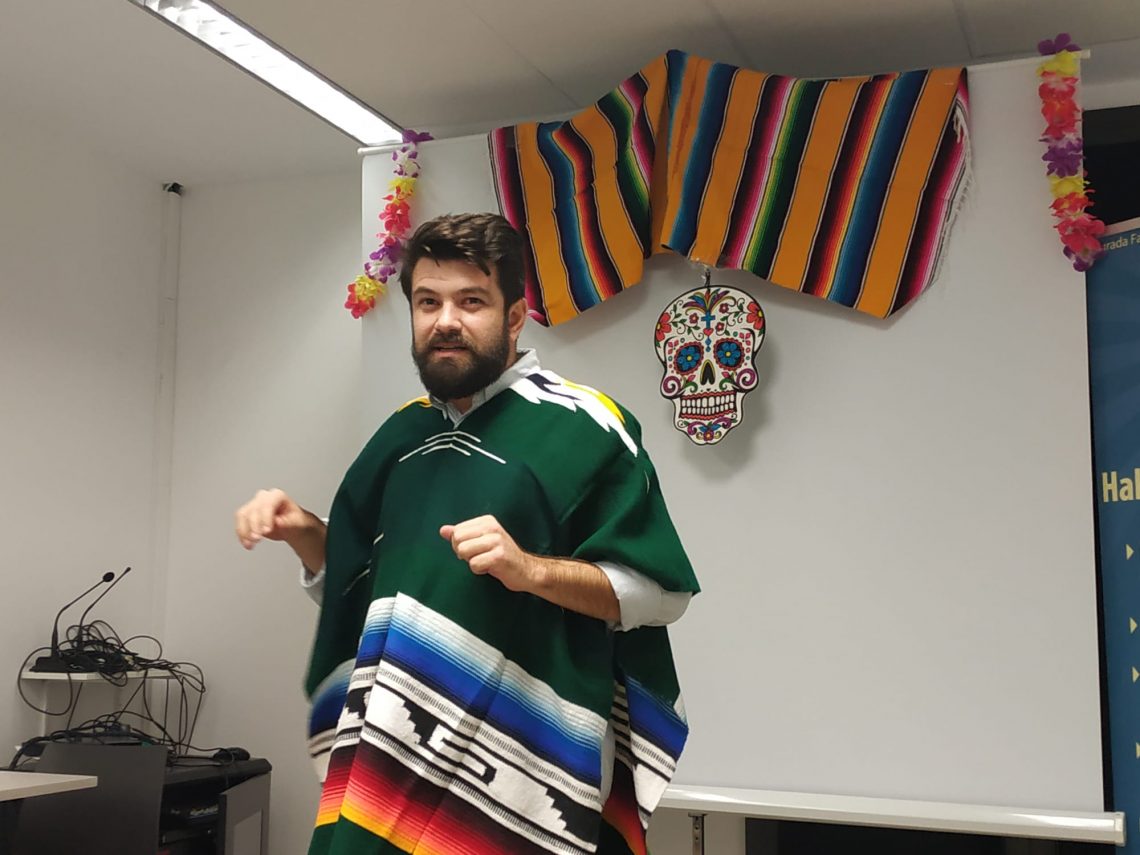 Day of the dead

The acting President, Sebastian Spada told as a story about the founder of Toastmasters, he was very nervous when he joint the club. That’s an example, to reflect that be nervous is normal at the beginning. Sebastian introduced the guest of the session: Robert, Jose Luís (Selu) and Paul from another club. A bit latter Sandra joined us.

Jose Manuel Gutiérrez was the Toastmaster, for the first time, of the session. He did a very good job with the decoration of the room with flowers, candles, and many mexican details reflecting the theme of the day. He told us that the topic seems scary, but isn’t in Mexico. The family remember death people together and the offer all what they have. In his case he offered cigarettes to his grandmother and tequila to his grandfather. It’s a moment to think and enjoy.
He explained us what’s a session in Toastmasters, the roles, the speeches, etc. He presented his technical team: Juan Escobar (general evaluator), who explained us the importance of life and death, otherwise there wouldn’t be enough space in the world for everybody…, Eucleia Ferreira (Ah-counter), Daniel Estorach (Timekeeper), Mario Mera (Grammarian), who suggest the word RELIVE as word to use during the session.

The first speaker was Johanna Reinoso, with her icebreaker called “Decisions”. She explained us several parts of her life, first when her parent took decisions about which sport she practiced, gymnastics, basketball, etc., but she didn’t really like it. She was testimoni of a car accident that changed her future. She realised of who important is health for life, so she decided to study medicine in Ecuador, then she moved to Asturias and now in Barcelona.
Victor Piqué was her evaluator.

The second speaker was Jaume Adrover, with the speech called “Shared Knowledge”. He impressed everybody with the very sad experience he lived when he was working by Spainair in 2008 and a flight from Madrid to Las Palmas never arrived. There was more than 160 passengers, 10 crew and only 19 survived. He was with the families after the accident. It was the worst story of his life. When sad things happen, you have to think about it and share your knowledge.
Sebastián Spada was his evaluator.

The third speaker was Martina Steffens, with the speech “Mentorship”. She explained us the importance of having a mentor because is the person how encourage you and give you good advices. She explain us her experience the first time she was in Toastmaster, she thought it was a sect because everybody was clapping and laughing all the time. Fortunately her mentor explained her everything. Some months ago, she was proposed to be mentor of Eva, what she’s doing now. She remembered us the 3 points of the mentor: encourage, share the experience and give you support as a coach.
Joan Pont was her evaluator.

The fourth speaker was Scarlet Vázquez, with the speach “La Media”. She did the speech in spanish because she was practising for the B&B Contest of the next weekend. After reading about the decrease of sex along the time, she decided to study the frequency and quality of sex relations around her asking at work, with friends, her couple, etc. At the end she arrived at the several conclusions: quality is inversely proportional to quantity, the average has decreased, she is not the best at bed.
The evaluation was opened in this case, so everybody could give the feedback to Scarlet, so she can use it to improve the speech for the competition at the contest.

Alba Lucía Hincapié proposed us the Table Topics. She explained us the importance of this part. Listen carefully, think about the situation and confirm if you have doubts and speak. The voluntaries were:
Roberto. Why is important to you to celebrate the day of dead?
Selu. What’s your favorite date of dead celebration?
Paul. Tell us about somebody of your family that’s not here anymore.

After the general evaluation, Jose Manuel ended his session as Toastmaster with a nice sentence: Relive the memories!

Finally, Sebastian Spada gave a voucher to Johanna for her icebreaker and reminded us that the 9th November is the B&B Contest and that people still can subscribe to attend it.