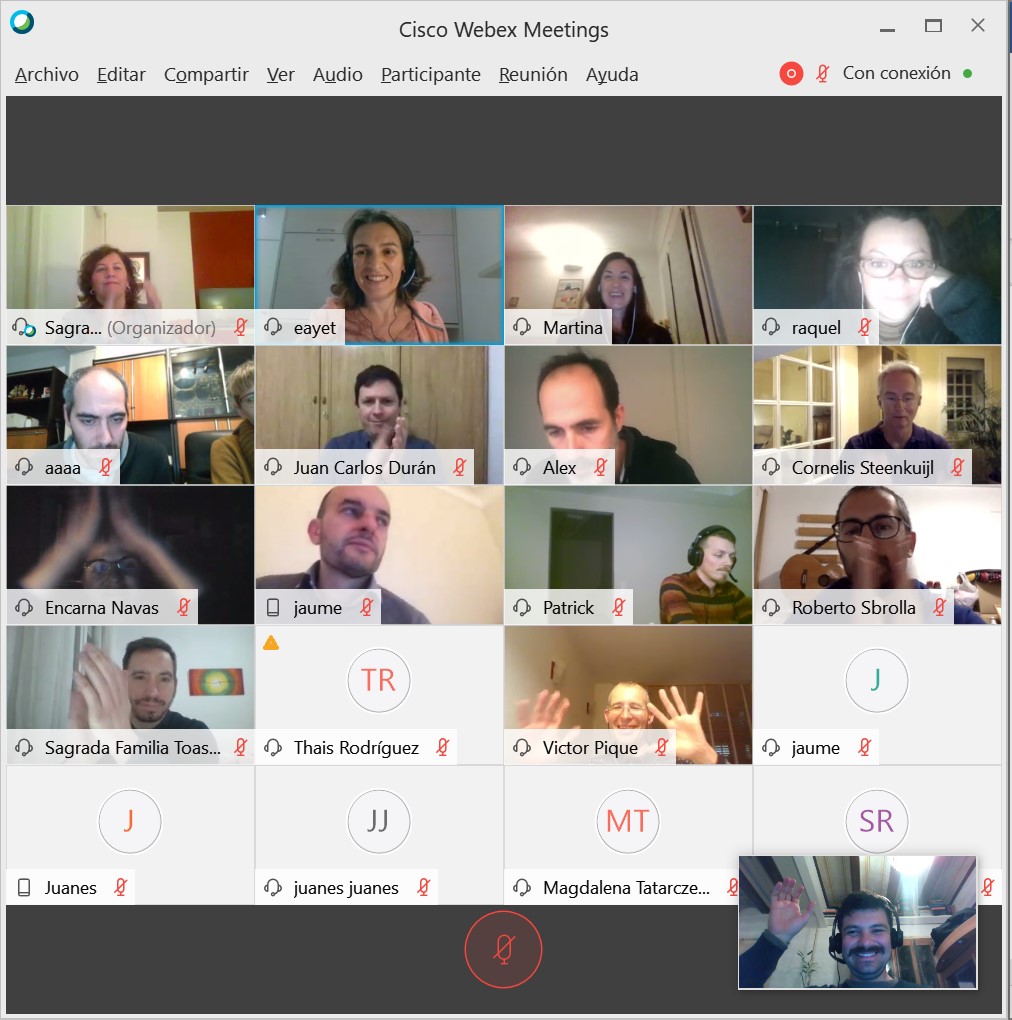 After few but not relevant technical issues we all connected to our second remote session! Jordi Magdaleno our Sargent of Arms (and his partner, yet another guest to our session!) invited us to mute our speakers while other people are talking and some other techinal aspects to start our meeting.
Joan Pont, presiding the session started by introducing other guests, among which Magdalena, member of EADA Toast Masters and later speaker in the session. This is the second time she’s in our club, the first one she participated as General Evaluator. We also had Thais from Valencia Toastmasters who ended up by inviting us to their remote session the day after ours.
Followed by the introduction of our guests, Joan invited the Toast Master, Juan Carlos Durán who introduced the topic of the session: Challenges. Just like the one he had preparing the session in only 2 days after the invitation from the President a couple of days before the session, not an obstacle for Juan Carlos. After the introduction to the topic the Toastmaster gave the mic to the General Evaluator, Martina Steffens who explain how challenging the new online format of the session is, but nothing too hard when having an amazing technical team on her side:
• As a Timekeeper, Raquel, with her beautifully hand-crafted green, amber and red cards with happy and not too happy faces on them.
• As Grammarian, Eva Ayet, who sared the word of the day Resilient or Resilience, and explain that we humans are one of the most resilient species in the world.
• And as the Ah Counter, Alex , hoping that the audio won’t affect his ah-counter-evaluation performance (at the end of the session we saw how that challenge was not an issue for him when he efficiently shared his evaluation).
The agenda was followed by the Toastmaster introducing the first speaker of the night Magdalena Tatarczewska (according to her, Juan Carlos had a perfect pronunciation). Juan Carlos explained how Magdalena’s challenge this year is not worry about things she can’t change.
Magdalena presented the speech ‘The Sky is not the limit’ where she explained how her fear of claustrophobia was dismissed after scuba diving in the Indian Ocean, and that the Kilimanjaro was as challenging as trying to come back to Spain due to cancelled flights and quarantines in the last couple of weeks due to Covid 19.
We had an open evaluation for Magdalena where people in the session raised their digital hands to provide feedback for her. Among the online evaluators we found Joan Pont, Patrick van der Berg, Sandra González and Víctor Piqué.
The toast master sum up the evaluation for Magdalena and continue to introduced the second speaker of the night, who does not care how challenging is to learn that song in the guitar, he’ll make sure to play it before the deadline, Patrick van der Berg presented his speech ‘Spiral’.
Patrick new how to get the attention of the public by asking who has felt frustrated by not being able to leave home in the last days: everyone. Patrick invited us to see large challenges as a group of little tasks, when marking the tick box once the little task is finished, you’re physiologically closer to your goal. Don’t run in spirals, prioritize and execute! Patrick’s evaluation was on the experienced hands of Joan Pont, who enjoys.
We had a third speech but for some technical difficulties we had to go ahead with the session and moved to the next part: the Impromptu Speeches with the Table Topic Master of the Session Victor Piqué who doesn’t care about the challenges when he knows there’s nothing he can do about it.
There were 3 volunteers to present a topic in a maximum of two minutes with only thirty second to prepare it Cees Steenkuijl, Roberto Sbrolla and José Manuel Gutiérrez.
The Toast Master continue with the… wait … what? The third speaker is here, he actually made it to present his speech! Jaume Adrover, presented the first ever audio-only speech in the history of Sagrada Familia Toast Masters‘. His speech was a preparation for the Area Contest in the Spanish category, the title: ‘Olvidate del ayer, olvídate del mañana’ (Forget about yesterday, forget about tomorrow).
Do you remember what did you do before the confinement? Well Jaume didn’t because he was just too busy working, he does not want all those little things that happen with friends and family anymore. He ended his speech by clarifying that there are two days in the year where there’s nothing you can do: yesterday and tomorrow. Alba Hincapié was in charge of providing the positive parts of Jaume’s speech and also things that she believes he should improve.
The General Evaluator and her team did the final evaluation, timing can be improved for the next online sessions we all forgot to use the word of the day: Resilience, but in general, people did a good use of the language.
The President took the word back to finalize the session highlighting how RESILIENT we were to continue with our session despite the technical challenges.