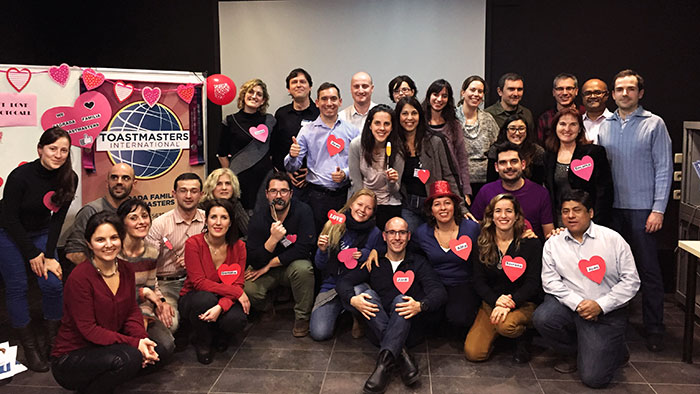 Headquartered in Barcelona, Spain, the Sagrada Familia Toastmasters Club is a bilingual (Spanish and English) club. It forms a part of the Toastmasters International network, which is the world leader of communication and leadership skills development.

The mission of this club is to contribute to the empowerment of its members so that they become more efficient communicators and leaders. To this end, we provide a friendly, trustworthy environment that facilitates the study and development of communication and leadership skills, thus promoting self-esteem and personal growth.

The Sagrada Familia Toastmasters Club received a charter in March 2012 with the club number 02355672, and currently forms a part of Area 2, Division B, 107th District of Toastmasters International.

The Sagrada Familia Toastmasters Club usually meets every first and third Monday, as well as on the fifth Monday if one occurs within a given month.

“The Sagrada Familia Toastmasters Club is the place where you can find, rediscover, and give life to your voice. The best part is that there is always a smile and a big applause waiting for you.” ~ Melina

“In the club, I found a unique place with amazing people where I could develop my public speaking skills at my own pace. You commit yourself to your goals according to your schedule, and you will progress without any pressure or hurry. I recommend it 100%.” ~ Juan Carlos

“A friendly, easygoing place where I can confidently practice my public speaking skills. Practicing will be a journey that takes me to improvement to the point of becoming a great orator.” ~ María Mercedes

“An international and very familiar ambience where you can give free rein to your public speaking skills without reservation, while growing as a person and as a leader. You can share with people of very diverse national origins: Colombia, USA, Germany, Bolivia, Spain, and others.” ~ Alba Lucía.