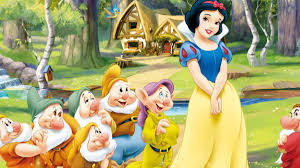 Once upon a time… That’s the sentence that we find in nearly every fairy tale. At Toastmasters we dedicate each session to a specific topic. And the topic of last session was “Fairy Tales”. After the introduction of our club President, Mario M., the Toastmasters of the session was called on the stage. Andres V. revealed us that hidden messages behind fairy tales tend to be more connected with our reality than we may think.

Many researchers tell us that fairy tales are wise stories full of meaning and symbols. For example Cinderella represents a story of personal growth and transformation. And the apple present in many tales is a symbol of sexuality. In the story of Snow White the apple that the wicked step mother presents to Snow White is half white and half red symbolising the good and the dangerous side of love and sexuality.

There wasn’t enough time to learn more examples. However there was time enough for the participants in the session to feature in their own fairy tale. In that tale a group of wizards applied their magical skills to contribute to the good developing of the session. That group of wizards was the technical team with Alba Lucía H. as General Evaluator, Mitka P. as Timekeeper, Emilio F. as Ah-counter and Juan E. as Grammarian.

Three brave speakers delivered their prepared speeches. They had to fight their personal and inner dragons: fear, nervousness or insecurity. Two of them delivered their first speech, the so called “Ice Breaker”: Andrea G. with her speech “The Shepherd, the Sheep and the Crying Bell” and Patrick v.d.B. with his speech titled “My Journey”. And Celeste C. delivered the third speech of the Competent Communication Manual with the title “Ticket to Happiness”.

The session ended with the president Mario M. awarding with the corresponding ribbons the two club members that delivered their first speech of the Competent Communication Manual, Andrea G and Patrick v.d.B., and Robert K. for having achieved half of the Competent Leadership Manual.

We enjoyed a wonderful session and…. lived happily for ever and ever. 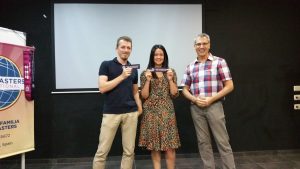 Patrick v.d.B. and Andrea G. with their ribbons 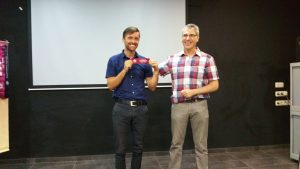