The Sergeant at Arms, Encarna, presented the new session of the evening, and introduced our current Club President, Mario Mera. He welcomed the newcomers and guests and asked them what had brought them to the Sagrada Familia TM Club. Joyce, one of the guests, was from China, where she is a member of TM Federico, from Italy, had been invited by one of our members. Laia was at her first TM meeting and very happy to be with us. Joan came to TM because he read some articles about people enjoying the TM experience and is eager to learn how TM works and participate in the next sessions. We have become really popular on the Barcelona TM scene, said our President, and he encouraged all the new attendees to participate in different roles and to prepare their Ice Breaker.

Our President presented the new members of the club: Sophie and Albert, then gave the floor to the Toastmaster of the session, Cristina Cohí. In every session, we have a topic. Cristina chose «Visits» for her theme. She has learned a lot of speaking techniques as a visitor at other clubs and liked the idea of telling a  joke at the beginning. She also explained to the audience what she likes and dislikes about  having “visits” and guests at home.

Then she introduced Rebeca, our General Evaluator of the evening: “people join TM to improve their speaking skills and it is very important to give them feedback on how well they perform as speakers”. For this task we need a team: The Timekeeper, Encarna, the Ah-counter, Joan, and the Grammarian, Aritz, who proposed the word of the day “hospitable”. At the end of our session the team gave its report.

The first speaker was Sussie Hunt. Her speech was about  Reiki, the energy. This was her fourth speech (seventh project). Reiki is a healing energy which works holistically in the whole body, mind and spirit, for humans, animals and plants. She talked about the aura, the energy fields, the chakras and meridians. Victor Piqué. was her evaluator.

The second speaker was our friend from AGORA TOASTMASTERS CLUB Toky Rakotoarimanana. Her speech was from the advanced manual “Interpretive reading” on Cinderella. Mario Mera was her evaluator.

At the end of the session came the feedback. Rebeca called her team – the Timekeeper, Ah-counter and Grammarian – to give their report on every speech. 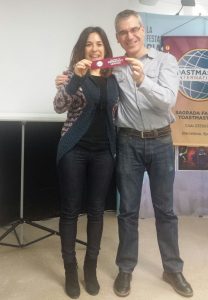 Finally, our President, Mario, gave a ribbon to Aritz for his Ice Breaker speech in the last session, and to Rebeca, who achieved the half-way point in competent leadership. 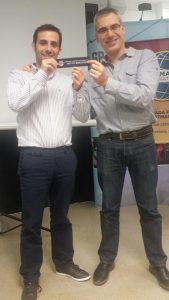 At the end, our visitors and guests gave their opinions on the session. Encarna, the Sergeant at Arms, encouraged everybody to confirm their attendance at the next meeting.