The meeting theme of our last session was “How to solve a problem”. Another opportunity to learn more. In this occasion to learn more on how to tackle problems.

Our President Alba Lucía Hincapié welcomed all the members and guests with an enthusiastic speech that raised our spirits. The spark of energy and enthusiasm was already lighted.

Afterwards the Toastmaster of the session Mario Mera presented the evaluating team composed by: María Mercedes Basso as General Evaluator, Gemma Pallerola as Timekeeper, Serrana Zorrilla as Ah-Counter and Susie Catrona as Grammarian. 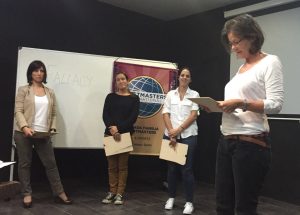 Before the first speech Mario shared with us a story of a job interview, where four candidates were told to face a problem. The problem was just an egg placed on a chair.

In the first speech with the title “The Quarter Life Opportunity” Albert Cervelló explained us how he experienced his own quarter of life. That special moment when we tend to feel lost, even if we have it all. As he indeed did when he arrived to that point.

He gave us some pieces of advice to overcome that moment by connecting with ourselves and with our mission in life.

The evaluator of this speech was Victor Piqué. He believed that the main purposes of the Competent Communication Manual were achieved in this speech. He discovered as usually some improvement areas such as the body language or the ability of summarizing more.

And again on the stage there was another participant. This time was the turn of Celeste Catena with the second speech of the Competent Communicator Manual entitled “You Pet, Adopt a Human”. She attracted the attention of the audience by putting some questions about our relation with pets. She discovered us the reality of the pet shelters. And she invited us to cooperate with shelters as volunteers.

Juan Carlos Durán acted as evaluator of this speech. According to his evaluation the main targets of the Competent Communication Manual were achieved. He also recommended to the speaker to structure more the central part of the speech, for instance by giving more reasons for people to adopt pets.

And the third speech of the session and the last one of the prepared speeches was delivered by Alba Lucía Hincapié. With her speech “Lessons from a Training Camp” Alba shared with us her experience in a training camp that she attended in Malaisia.

That was a motivational and improving camp where three hundred people of all over the world gathered. By participating in that camp Alba Lucía learnt to be stronger and more confident, to avoid seeking the approval of others, to trust others and to have the courage of taking action. That camp was a platform to improve and to come out of the comfort zone. Those features are also part of Toastmasters. She finalized the speech by inviting us to take action despite our doubts.

Our guest Peter Mc Kenzie did the evaluation of this speech. He loved her vocal variety and her presence on the stage. However he would have shown a sad face when speaking about the bad moments and use a more powerful voice at some peak moments.

Having already listened to three great prepared speeches, it was the moment for improvisation, the so called Table Topics. And the Table Topics Master of the session was Oriol Sancho. He called three volunteers to the stage and asked them to solve a problem. The brave volunteers were Esmeralda Uguccioni, Victor Pleschka and María Mínguez. The three of them did a great improvisation.

Then the technical team gave their reports. Their accuracy allowed us to learn how toimprove in some particular aspects. 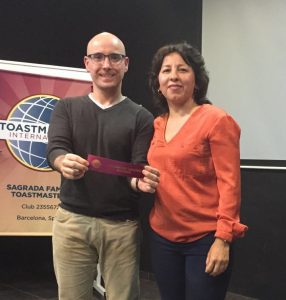 After that our President Alba Lucía delivered the ribbon of Advanced Leader Bronze to Jordi Mollón in recognition of his efforts and his contribution to the club.

And finally the session was closed by our Sergeant at Arms.